The topic of the conference was “Discovering Scholarship and Research in Academia” in conjunction with the annual IADR Conference held June 19th to 22nd. 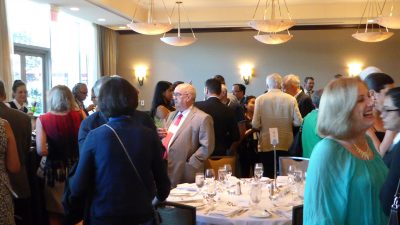 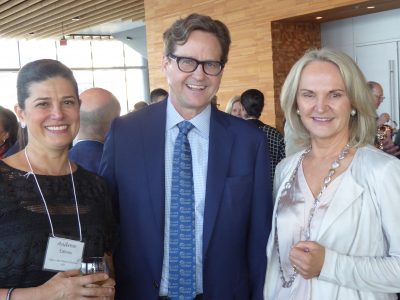 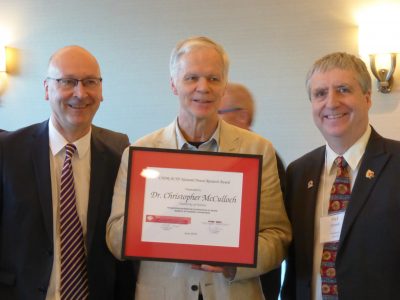 Dr. McCulloch has published over 295 peer-reviewed papers, with over 9,500 citations. His scholarly accomplishments can be noted by his h-index, which is an incredible 61. He has obtained over $55,000,000 of research funding over his career.

Dr. McCulloch is an internationally recognized leader in extracellular matrix biology with 32 years as an independent basic researcher. He combines in-depth knowledge of the fundamental biology of the extracellular matrix with long-standing expertise in clinical periodontology. He is a Tier 1 Canada Research Chair in Matrix Dynamics and was the Director of the CIHR Matrix Dynamics Group for 15 years. He has made major contributions to the support and leadership of graduate teaching in the Faculty of Dentistry at the University of Toronto, in part as his role of Director of the CIHR Strategic Training Initiative in Health Research on Cell Signaling and Mucosal Immunity for 7 years.

During this time period he was directly involved in the support and training of over 35 PhD students. He currently has over 75 graduate students being trained in his laboratory. His research integrates cell biology, clinical periodontology and cell mechanics. Using state-of-the-art methods, he has made fundamental contributions to our understanding of cell-matrix communication in health and diseases; including heart disease, periodontal diseases and fibrosis. He has tremendous expertise in approaching long-standing scientific problems with fresh approaches which have lead, for example, to the development of the first automated periodontal probe, cell and transgenic mouse models of disease, quantitative microscopy, the very early employment of randomized controlled trails for treatments of periodontitis and the patenting of three inventions from his lab.

He plays a central role in the conduct and leadership of Toronto’s Faculty of Dentistry research enterprise. 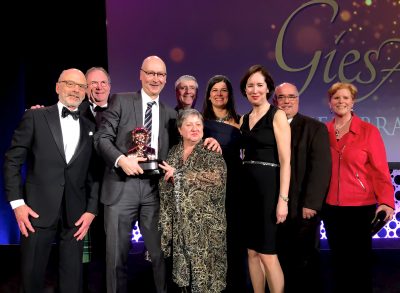 The ADEAGIies Foundation Board of Trustees has selected the ACFD as the winner of the 2019 William J. Gies Award for Innovation in the category of Public-Private Partner. This wonderful honor acknowledges the countless hours and collaboration on behalf of the ACFD Academic Affairs Committee, in particular, Drs. Anne Charbonneau, Marie Dagenais, Sylvie Morin and Joanne Walton that were spent on the creation of the document “ACFD Educational Framework for the Development of Competency in Dental Programs”. We are very proud to receive this honor, which will formally be presented in Chicago March 18th, 2019 in tandem with the ADEA Annual Session.

We are doubly proud to announce that McGill University, Faculty of Dentistry has also been selected for a 2019 Gies award for Vision – Academic Dental Insitiution.
This award recognizes the outstanding work at McGill’s Faculty of Dentistry to provide care for underserved groups in Montreal, while at the same time promoting innovative approaches to improving access to dental care for these groups. In McGill’s program students and residents learn about working with vulnerable groups in the community and undertake initiatives to better serve them as well as perform research to promote more effective care for these groups 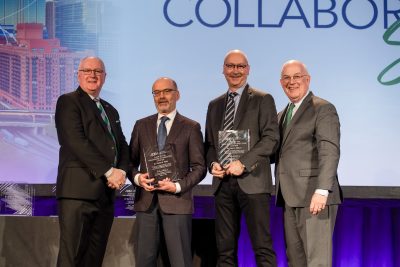 Drs. Paul Allison and Daniel Haas through their commitment to ADEA, have enhanced the collaboration among dental educators in the United States and Canada.
At the March 2019 ADEA Annual Session in Chicago, they both received  the “Chair of the ADEA Board of Directors Citation” for this work. 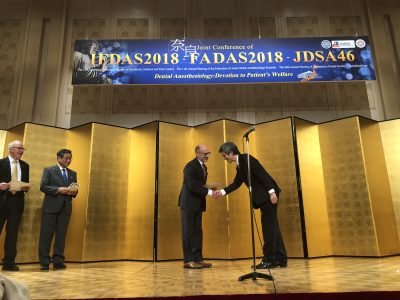 First Canadian to be awarded the Federation’s highest recognition

At the International Federation of Dental Anaesthesiology Societies (IFDAS) conference in Nara, Japan, dean Daniel Haas was presented with that society’s highest recognition: the Horace Wells Award. Dean Haas is the first Canadian to receive this recognition, which honours international accomplishment in the field of anaesthesiology in dentistry.

“I am deeply honoured by this international recognition,“ said dean Haas in a statement. In his acceptance remarks, the dean noted the importance of global collaboration to advance research and education in anaesthesia in dentistry.

The IFDAS conference is mounted every three years, and promotes the international exchange of knowledge, technology and research achievements in this discipline.

The Canadian Association for Dental Research (CADR) along with the Association of Canadian Faculties of Dentistry (ACFD) are pleased to recognize exceptional contributions to dental research at Canadian Universities through the creation of the inaugural CADR/ACFD National Dental Research Award. The award is open to any faculty member currently performing research who is a member of CADR in the year nominated and who holds a primary faculty position within a Canadian Dental Institution. The recipient of the award should demonstrate a significant contribution to the field to oral health research, exceptional knowledge of their field of study, an outstanding record of mentorship to trainees, and a profound effect on the current knowledge of an area relevant to oral health. This year, nominations for this award will be accepted up to November 1, 2018. The winner will receive a $2,500 prize and a certificate from the CADR and ACFD to be awarded each year at the CADR national or international meeting. The inaugural award will be given at the 2019 CADR/ IADR meeting in Vancouver, BC.

For further information on the award, as well as a nomination package, visit (http://www.cadr-acrd.ca/index.php/awards)

Only one nominee may be nominated from each dental institution.

Dr. Dieter Schönwetter was recognized for his exceptional contributions to dental education at Canadian Universities, at the University of Manitoba’s Welcome Reception at the ADEA Annual Session in Orlando, FL on March 18, 2018 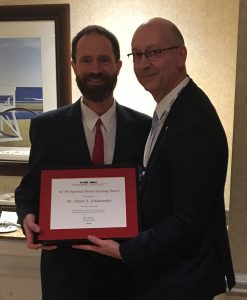 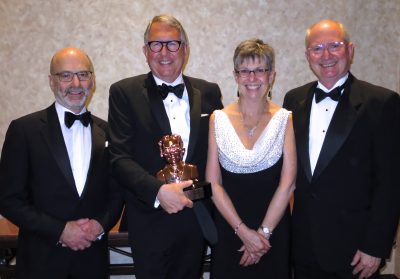 The ACFD Annual General Meeting was held in Vancouver, BC on Thursday March 8th, 2018

A new three-year Master of Science degree program in Prosthodontics will be launched in August 2018 by the College of Dentistry in the Rady Faculty of Health Sciences, University of Manitoba.

The U of M, located in Winnipeg, is one of only three universities in Canada to offer a graduate prosthodontics degree.

The program will provide a strong foundation in classical prosthodontics, along with intensive training in state-of-the-art aesthetic dentistry, digital workflows, CAD/CAM technologies, dental microscopy, and placement and restoration of dental implants.

Strengths of the U of M program include a low instructor/resident ratio, well-balanced clinical and didactic programs with a critical approach to literature, and opportunities for clinical research.

The 36-month program, under the directorship of Dr. Igor Pesun, will lead to a Certificate in Prosthodontics combined with a Master of Science in Prosthodontics. Successful completion of the program will satisfy the formal training requirement for eligibility for the Royal College of Dentists of Canada and Canada Fellowship. Fellowship is required for licensure as a specialist in Canada. Graduates will also be eligible for the American Board of Prosthodontics certification examination.

The program has applied for accreditation by the Commission on Dental Accreditation of Canada.

Ms. Susan Matheson received the ACFD Distinguished Service award at the conference banquet, in honor of her long term dedication to the dental profession. 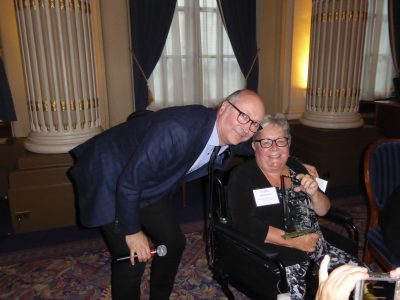 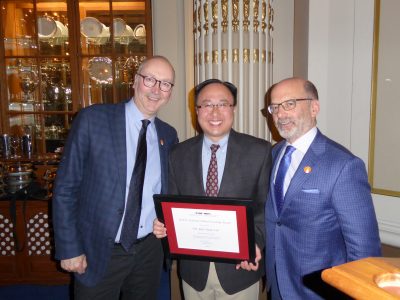 Congratulations to our colleagues at Université de Montréal, University of Toronto, University of British Columbia and McGill for your work being highlighted as three of the top ten articles in the JDE during 2016 – see below.
It is great to see that Canadian dental academics are having a strong influence in the world of dental education.

Top Articles in the ADEA Journal of Dental Education: 2016

The following articles are in the top 10 ADEA Journal of Dental Education (JDE) editor’s picks of 2016, selected by the JDE Editor, Dr. Nadeem Karimbux. These articles are now available for free on the JDE website through February 15,

The JDE Editor recognizes that many articles deserve recognition based on the quality and scope of the studies published.
The 10 articles chosen are based on quality, topic areas and design of study, and they represent the diversity of articles published in the JDE.
About JDE: The Journal of Dental Education (JDE) is a peer-reviewed monthly journal that publishes a wide variety of educational and scientific research in dental, allied dental and advanced dental education. Published continuously since 1936 and internationally recognized as the premier journal for academic dentistry, the JDE publishes articles on topics such as curriculum reform, education research methods, innovative educational and assessment methodologies, faculty development, community-based dental education, student recruitment and admissions, professional and educational ethics, dental education around the world and systematic reviews of educational interest. The online version of the JDE is freely accessible to all ADEA members by subscribing online at jdentaled.org.

Dr. Charles Shuler, professor and dean of the Faculty of Dentistry, has won the 2016 Distinguished Scientist Award in Oral Medicine and Pathology from the International Association for Dental Research (IADR).

This award, one of the highest honours bestowed by IADR, recognizes Prof. Shuler, according to the organization’s news release, for his outstanding and sustained peer-reviewed research in three major areas: 1) development of the secondary palate; 2) characterization of molecular changes in oral cancer; and 3) characterization of the role of microbial biofilms in bisphosphonate related osteonecrosis of the jaws.

Moreover, the news release recognized Dean Shuler’s accomplishments with the following statement: “For nearly 30 years, the primary research focus of Shuler’s laboratory has been investigations of the control of fusion of the secondary palate. These studies have examined the medial edge epithelium (MEE) of the palatal shelves. He and a team of scientists in his lab identified the critical role of TGF-β3 in the process of palatal fusion and the expression of that molecule in the MEE. Their findings of the critical role of TGF-β3 in palatal fusion have been translated into clinical applications screening pregnant women and it has been shown that some isoforms of TGF-β3 are associated with increased incidence of cleft lip/palate in humans when the mother smokes while pregnant. Their studies continue to examine the mechanism of TGF-β3 during palatogenesis to identify specific targets for teratogenic molecules that are linked with craniofacial birth defects. Additionally, he has been involved in education research and several clinical research projects.”

The award was presented to Charles Shuler in absentia at the opening ceremonies of the IADR’s 94th General Session & Exhibition on June 22, 2016, in Seoul, Republic of Korea.

ACFD Past-President and Dean of the Faculty of Dentistry at the University of Toronto, Dr. Dan Haas recently received this prodigious award from the CDA. At the CDA’s recent AGM Dan received the CDA Honorary Membership Award, which is given to an individual who has made an outstanding contribution to the dental profession, the dental community or the oral health of Canadians over a sustained period of time at the academic, corporate, specialty society, council, commission or committee level. An outstanding contribution at the national level shall be a principal consideration. The breadth and scope of achievement is a significant factor in determining this award.

Many know Dan and will agree that he thoroughly deserves this recognition from the broader dental community beyond academia. We, at ACFD, are very proud of Dan’s achievement and indeed of the contributions and achievements of all members of the dental academic community. 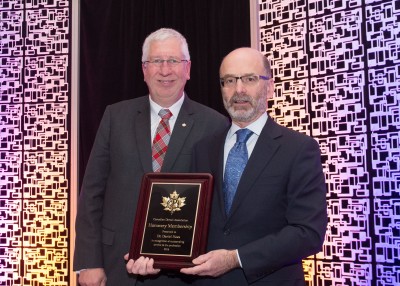 The topic for the conference was “The Alphabet of Post Graduate Year Options: PGY1, AEGD, GPR, DF1….” 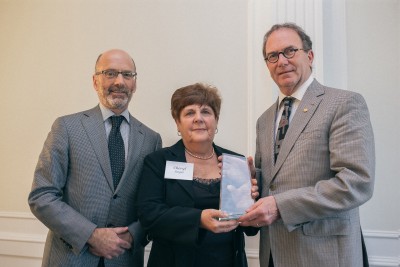